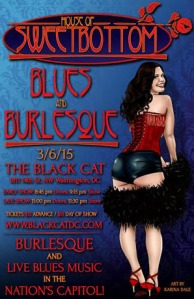 In December 2013, I pitched a show idea to Palace Productions, DC’s main booker for burlesque and variety.  The show would include two sets of live blues music by a solo musician and burlesque performances by 3 – 4 performers.  I wasn’t sure if there was a market for it, but having successfully co-produced a number of nerdy burlesque shows with the Evil League of Ecdysiasts (with DC burlesque performer, producer, and teacher GiGi Holliday), I felt ready to try producing on my own.  Palace Productions and the Black Cat went for the idea, and House of Sweetbottom was born.

The first show, on the first Friday in March 2014,  featured DC bluesman Jonny Grave; GiGi Holliday; Cherokee Rose (producer of Naked Girls Reading DC); and Candy Del Rio (co-producer of Valentine Candy Burlesque and VC Variety), with Whiskey Joy (co-producer of Baltimore’s Timeless Tease Productions) as the stage kitten.  Jonny hosted, in addition to playing two sets of slide guitar blues, and I performed two acts.  We did the show twice–the early show sold out.  House of Sweetbottom was a success!  Nothing makes me happier as a producer than when everyone in my show and in the audience has a great time AND I’m able to pay everyone well.  The highlight, for me, was premiering a new act, Robert Johnson’s “Ramblin’ On My Mind”, with Jonny playing and singing live.

Three months later, in June, House of Sweetbottom returned to the Black Cat, this time with burlesque performers Maria Bella (producer of Baltimore’s Gilded Lily Burlesque), Dainty Dandridge (co-producer of Chocolate City Burlesque & Cabaret and Best of Burlesque(er)), and Glam Gamz (co-producer of Under The Sheets and Best of Burlesque(er)).  Jonny, Whiskey, and I reprised our roles.  “Ramblin” On My Mind” had begun to evolve, with new costuming and choreography.  Once again, I was able to pay everyone well and we had a fantastic time.

Although I envisioned House of Sweetbottom as a quarterly show, I skipped September due to some outside commitments.  The first Friday of December saw us back onstage at the Black Cat, with the intoxicating Sheila Starr Siani from California; Nona Narcisse from Baltimore; and Reverend Valentine (co-producer of Valentine Candy Burlesque and VC Variety–and one of my first burlesque teachers!); with Jonny, Whiskey, and I again.  By this time, the Black Cat had changed their scheduling of burlesque/variety shows to only one show rather than two in the same night.  We didn’t just sell out…we oversold the room!  Changing up the previous formula, I hosted the show and performed only one act, and Whiskey Joy performed a sizzling new act.

So here we are, one year later.  Tomorrow night, we return to the Black Cat backstage for TWO SHOWS (9:15 pm and 11:30 pm) with DC singer/songwriter Maureen Andary (one half of The Sweater Set); and burlesque performers Deepa De Jour (producer of the Richmond Burlesque Revue), Sophia Sunday (of Baltimore’s Gilded Lily Burlesque), and Cherry Bomb (managing director of Philadelphia’s award-winning troupe The Peek-a-Boo Revue).  I’ll be hosting and performing an act with Maureen, and Whiskey will be kittening.

Thank you to everyone who has supported me in this venture, especially the owners and staff at the Black Cat, Melina Afzal of Palace Productions, the fantastic performers who have graced the House of Sweetbottom stage, and everyone who has come out to a show!  We look forward to giving you more cool blues and hot burlesque in 2015.

Hold on to your cocktails, let go of your inhibitions, and step into the House of Sweetbottom.  Hope to see you tomorrow night!